Hi, I’m Noah! This summer my wife and I are having twins. You know, I heard the theme music I use for TwinDadBlog in a Pepsi Commercial. Dear PepsiCo, you are a multi-billion dollar corporation, you don’t have to use free, public domain music lifted from Garage Band. Even if it does sound as cool as this.

Hey, it’s mailbag time! These are from emails and Facebook messages I’ve gotten from friends, most of whom had no idea I would be using their names and comments in this forum. Um … thanks!

Jason, a friend of mine from Alabama writes
“I gotta give it to you. TwinDadBlog is not that bad.” –Jason

Thanks Jason. I have to give it to you. Not everyone from Alabama is an inbred donkey lover.

XXXXXX of San Diego California asks
If the twins had fetal super powers, what would they be?

Okay, now I’m trying to think of superpowers a fetus could have that wouldn’t prove incredibly detrimental to their mother’s health … for example, adamantium claws would be right out.

I just like this one because ever since I’ve known Bobby I always thought his name sounded like a 1950s teen idol and him calling me “daddy-o” just adds to that. So, thanks Bobby, I think you’re the bee’s knees, too.

XXXXX of San Diego, CA writes
Will you do a vblog in the hospital during delivery? But in the current style, where neither Amanda nor twins are allowed near the camera?

Yes, that’s my plan, to be off in some other corner of the hospital with Amanda’s MacBook, making a sardonic video blog entry, while she’s screaming in pain from her latest contraction.


Mr. Richard Feder of Fort Lee, NJ writes,
Now that you have a beard, how can we tell the difference between you and your evil twin Haon from the Evil Twin video?

What an utterly preposterous question.

XXXXX of San Diego, CA writes
Are you going to be one of those embarrassing dads that go around the house naked?

XXXX, I would prefer it if you spent less time thinking about me naked.


I’m going to have to put this next one, from Emily Wilson, on the screen.

XXXXXXX of San Diego, CA writes
Are you ready for two daughters? Like, really?? The mere idea of one daughter becoming a teenager and then going to college would freak me out!

I met XXXX when Amanda and I were working with college students on a program called Semester at Sea. Israel organized a screening of the Rocky Horror Picture show and convinced a number of the female students to dress up in lingerie for the event. So my answer is, I think I’ll be fine if I have daughters and they go off to college as long as they stay away from people like XXXXXX of San Diego, CA.

And finally, Eric Keenan-Gray posted a quote from an Anonymous author:

"Two faces to wash, and four dirty hands
Two insistent voices, making demands
Twice as much crying, when things go wrong
The four eyes closing, with slumber song
Twice as many garments, blowing on the line
Two cherubs in the wagon, soaking up sunshine
Work I do for twins, naturally comes double
But four arms to hug me, repay all my trouble.
~Author Unknown

Um … I should probably say something snarky and hilarious now, but … that was just … wow.

Hey, let’s do more of these, like, maybe one where not all of the questions from come from XXXXXX of San Diego, CA

(PS, XXXX’s really a great guy and I was just kidding)

Video coming soon. I have one shot, just not edited. Sorry, we were away for the weekend for a Baby Shower at Amanda's Mother's house in York, PA. It was a great party and a great weekend, all of which I will tell about soon. But for now, please enjoy two little quizzes I made as party games for the shower. Answers are in white below the question, so highlight the blank space to read.


TWIN QUIZ
one point for each correct answer
What chewing gum used identical twins in their advertisements?

Doublemint
In the Harry Potter books, what are the first name of the Weasley Twins?
Fred and George
BONUS: Name another pair of twins from the Potter books
Padma and Pavarti Patil or Fabian and Gideon Prewett (unconfirmed if they were twins, but we think they were)

What sign of the Zodiac represents twins?
Gemini
BONUS: The name of this sign inspired a Saturday Night Live parody of Destiny's Child called _________________
Gemini's Twin

In mythology, twins Castor and Pollux had a pair of sisters who were also twins who married a pair of brothers.  One married Menelaus, King of Sparta, and famously left him for another man.  The other married Agamemnon, King of Mycenae, and eventually murdered him.  Name these twin sisters.
Helen (of Troy) and Clytemnestra

What popular series of children's novels featured two sets of twins in one family, Bert and Nan and siblings Flossie and Freddie?
The Bobbsey Twins

They were born Esther Pauline Friedman and Pauline Esther Friedman, but we know these twins by what pen names?  (HINT: Both had long running newspaper columns)
"Ann Landers" and "Dear Abby"

What former NFL star and current broadcaster has an identical twin (who also played in the NFL), and will soon become the father of twins?  (HINT: He's been in the news latelty because he's divorcing his 8-month pregnant wife to be with a much younger woman ... yeah, he's kind of a jerk)
Tiki Barber

Which of these TV shows did NOT have a pair of twins as its central characters?
Beverly Hills 90210
The Patty Duke Show
Sister Sister
The Suite Life of Zach and Cody

Match the names from Column A to their twins in Column B (sorry, you don't get last names in Column B, exept in one case, where the character's first name is unknown)

Within five years, how old are the oldest living twins in Britan?
110

Within two inches, how tall are the tallest living twins?
7'6"

That was one game, here's the other one.


FILL IN THE BLANK
with a phrase including the word "baby" "babies" "twin" or "twins"
When baseball's Washington Senators moved to the Midwest, they became ____________
The Minnesota Twins

In a popular early-90s TV series, Kyle MacLachlan was an FBI agent investigating the murder of Laura Palmer in _____________
Twin Peaks

If an actor is playing two roles in a soap opera and the second character has a goatee or eyepatch, he is probably the first character's _______________
Evil Twin

So, yeah, a tricky quiz.  But, hey, people had to WORK for that Toblerone bar that we gave out as a prize. 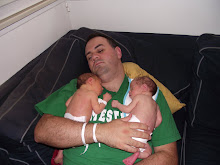